Time to plug in some contests!

I know a lot of you already know about these two contests but here's the chance for anyone who has missed out on the news. Let's start off with the MLB Postseason contest over at The Great Orioles Auto. Project. Here's your chance to make your guesses on who wins the MLB playoffs with this bracket challenge. All details can be found here.

Over at The Card Hobbyist you can win a bunch of cards just by commenting on the blog during the month of October. You can enter and find the details by hitting the jump.
As always good luck to everyone who enters and if you win any Astros cards I hope you think of me. Ha.
Posted by Trey J. at 5:47 PM No comments:

Email ThisBlogThis!Share to TwitterShare to FacebookShare to Pinterest
Labels: Contest

Two Autos and a Plate

The cards featured below are probably some of my nicer cards I've received this year. Two of them came via eBay and one was from a trade over at my favorite forum, Sports Card Arena. 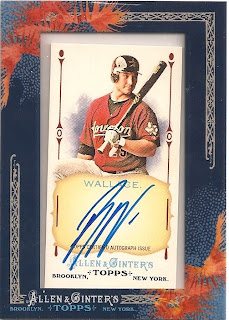 I really like the look of these 2011 A&G autos. I picked this one up awhile back for less than $4.00 shipped so I think it was a pretty good bargain. I hope Wallace improves during the off-season and comes back next year ready to take over 1st. 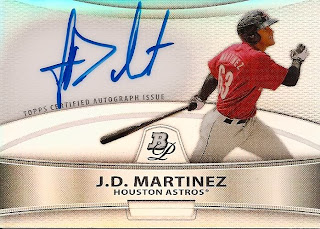 I am in love with this 2010 Bowman Platinum auto from my new PC guy (taking the place of Pence. Bagwell is still #1 with J.D. coming in 5th behind Biggio, Berkman and Ensberg). I looked at these autos in January and I could have paid $5.00 or so for it but I waited and now I had to pay $12.00 shipped once he got called up and got on a hot streak. Since I don't plan on flipping this card for a profit I'm okay with that investment. 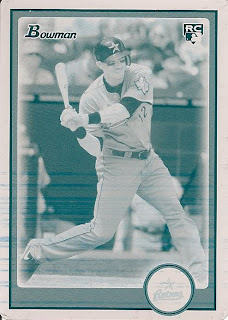 This is my first printing plate and my first ASTROS 1/1. Awhile back I was fortunate enough to pull a sick 1/1 patch auto of Don Maynard from 2008 Leaf Certified but I've never owned a 1/1 for my PC until now. This was the card I traded for on SCA and I think it was pretty fair. I traded a handful of 2010 Topps Chrome refractors and a Strasburg rookie for Mr. Manzella here.
I hope you enjoyed the read and I'll be back soon with a few Bagwell PC items to show off.
Posted by Trey J. at 4:17 PM 3 comments:

Recent eBay Pick-ups from the past few weeks...

Here are a couple of eBay pick-ups I've received over the past few weeks. I haven't been buying too
many cards lately due to the increase in comics I've been getting each week. Once I get through September and narrow down my pull list I should be back on my normal amount of card purchases. I got pretty good deals on the following cards and used up whatever was in my PayPal. 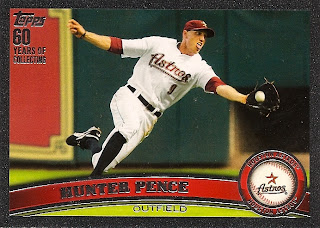 I know I said I was done with Hunter Pence cards and I basically am but I set a goal to get all the 2011 Series 1 Astros cards and I couldn't resist this black border 13/60. 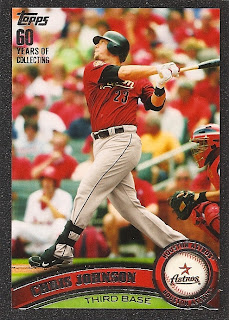 Here's another #/60 but at least this guy is still on the Astros (for now at least). I'd much rather have Pence on the team but you'll take what you can get when you're a 'Stros fan ha. 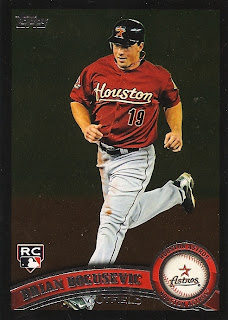 This isn't a #/60 black border but the normal Walmart black border. I am a big fan of Bogusevic and behind J.D. Martinez he is my new favorite Astros player. I got this bad boy for $0.26 SHIPPED!! Yes the card cost less than the stamp to send it.
There you have it, three pretty cool Astros cards for less than $10.00. I can't complain about that especially when the majority of that money came from the Pence card. I'll be writing another post soon about the two auto's I got off eBay and a trade with someone over at Sports Card Arena.
Posted by Trey J. at 6:55 PM 3 comments:

I recently traded with Ron over at Section 36 after he posted some trade bait. I have a couple of Oswalt GU already but I couldn't pass up the chance to get this nice looking 2008 A&G GU. 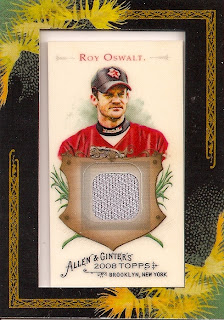 This is where being fairly new to card collection has an advantage. I think collecting for less than a year now I haven't become fully jaded to all the overproduction of jersey and bat cards. I still get excited getting a one color Astros/Texans jersey from trade or eBay. Heck even when I have a mail day of mostly common or insert cards I get excited. I hope to keep this excitement towards the "little things" for quite some time but I know a time may come when I lose that feeling, but for now I'll cherish it.


If you don't already follow/read Section 36 you really should. It's a very enlightening and entertaining blog that I try to keep up with daily. Today's post about giving away free tickets to games is a good one. Thank you Ron for the trade and hopefully we can do another one sometime soon.
Posted by Trey J. at 5:16 PM 1 comment: