If you're an Astros fan you know that February means two things; spring training starts in a few weeks and the Astros will be driving around Texas and Oklahoma interacting with fans in different cities. I love the annual Astros Winter CAREavan because it gives fans the chance to meet players and coaches.

Depending on who is signing that day the lines can be 75 deep or 200+ deep if someone like Bagwell or Biggio is signing. Luckily yesterday the line was only about 100 deep and I got the chance to go back through the line a second time. Two of my favorite young Astros (Brian Bogusevic and J.D. Martinez) were there and I was stoked to meet them. 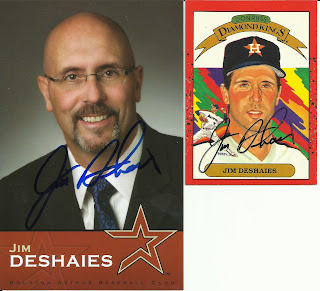 Jim Deshaies
Jim Deshaies is a former Astros pitcher and current broadcaster for the Astros on FOXSports. It's always fun meeting broadcasters and recognizing their voice while you're standing in line. Make you even more excited for the season to start. 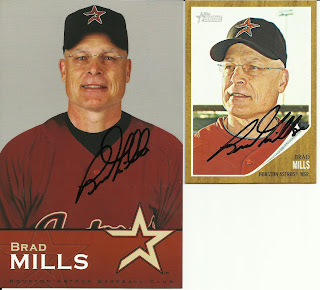 Brad Mills
This was my first time to meet Mills and he was a really nice guy. We didn't talk much but I told him good luck this season. He said "Thanks" and "Thanks for coming out tonight." 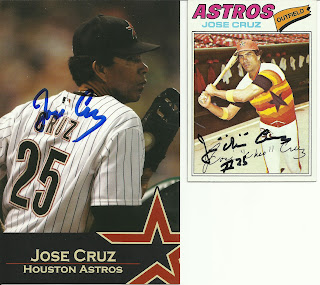 Jose Cruz
Cruz has been with the Astros for what seems like forever. I'm too young to know much of his playing days but I remember always seeing him outside the foul lines as the first base coach. I love how he signed the "Cheo" nickname on the 1977 Topps card I gave him. He even included his #25 which was retired by the Astros a nearly 20 years ago. 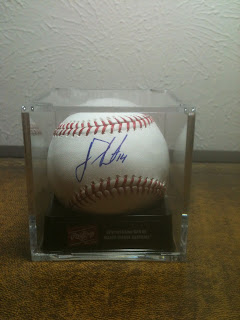 J.D. Martinez
J.D. Martinez was the main reason I went to the CAREavan stop last night (also because it was only a 10 minute drive from my house). He's my favorite current Astro and I'm hoping for big things out of him this season. He was actually a lot nicer than people told me he'd be so that was good. 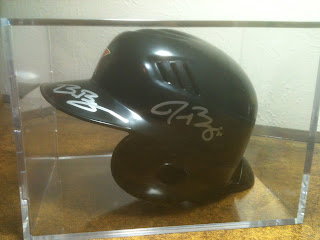 Brian Bogusevic (brim) and Jason Bourgeois (side)
Bogusevic is another guy I really like for the Astros and I think he's finally hitting his stride as an outfielder. He was drafted as a pitcher and the Astros took too long before deciding to switch him to offense. That's the reason he's had slower progress than you'd want but it looks like patience may be paying off.

Jason Bourgeois is a local boy from Houston who'll be competing for a starting position this year. I honestly think he's a better option in CF than Jordan Schafer but we'll see how it plays out. He's got super quick speed and range in CF. He's also a pretty active Tweeter and likes to interact with fans. 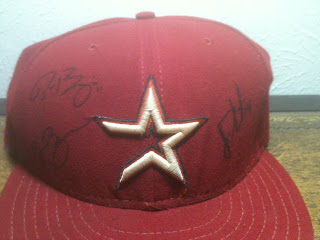 J.D. Martinez (right), Brian Bogusevic (bottom left) and Jason Bourgeois (top left)
The second time I went through the line I decided to get the guys to sign my 59/50 Authentic cap. I was hoping they'd still have some of their cards they brought to sign (so I could trade a few) but they were out so I settled on getting the cap signed.