An Apology and Meeting an All-Star

I first want to apologize to everyone for the lack of posting this month. There are some personal things going on right now (nothing to worry about) but everything on the blog front should be back to normal within the next week or so. I assure you I'll be posting more in the coming weeks and to make up for my lack of posts there will be a contest of some sort then too. Now to some good news.

Today I got the chance to meet Hunter Pence at a local autograph session. Reebok sponsored a signing at the Academy Sports and Outdoors in The Woodlands. The signing was free but was on a first come basis so I knew to line up early. My amazing girlfriend, amazing because she sat in the hot Texas heat for a couple of hours to keep me company, and I got to Academy 2.5-3 hours before the event was supposed to start and we were still #113 and #114.
The line moved quickly and we were getting our autographs about 30 minutes after the event began. Pence was extremely nice and we discussed the upcoming Silver Boot series for a minute. He told me he'd "play like crazy to bring the Silver Boot to Houston this week." It's always nice to see players getting pumped for a rivalry as much as we do.
I apologize for the quality of the photo(s) but I used my iPhone. I got an OMLB signed and Katie got my friends GU baseball signed. 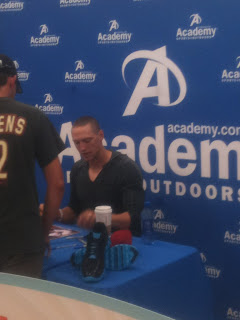 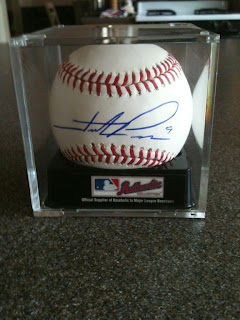 Thanks again to Academy Sports and Outdoors, Reebok, The Houston Astros and Hunter Pence for making this an awesome day.
Posted by Trey J. at 4:26 PM

Congrats! The ball looks great, it's always amazing to meet one of your favorite athletes.

Yea it is always great to meet an athlete. Especially when they're still playing. It takes a lot for a player to give up his off day to come sign for fans. That's one thing Astros players are good at, staying in touch with the fans.

@Really Cool: Thanks for checking my blog out, I'll continue reading your sites too.