I'm always looking to help people with any of their set/team/player needs so when I noticed I had some cards needed by Steve at White Sox Cards I contacted him and we hammered out a trade. Since the White Sox swept the 'Stros in the 2005 World Series I had no problem sending any Sox I had to Steve.

He sent over a bunch of good looking cards and helped me knock off some of my needs, here is just a sample of what he sent over. 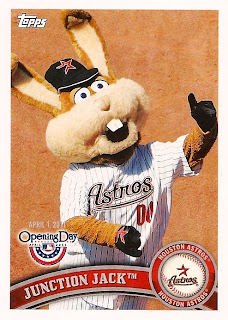 This is my 10th card in the 2011 Topps Opening Day mascots so I've got a few more to go but this one's special for two reasons: 1)he's a hometown guy/rabbit and 2) one of the guys who performs as JJ is a family acquaintance and occasionally hooks us up with great seats.
I asked in the previous post which uniform you guys liked most on JJ and for me personally it's this one. I like seeing him as a member of the team more than I do as a conductor. Feel free to leave your opinion or if you don't care feel free to mention that as well, ha. 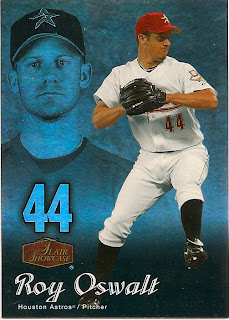 I'll always love Roy Oswalt no matter what team he plays for. He was usually an underrated pitcher during his time in Houston and I'm glad to see him get a little more national recognition over in Philly. This card design is pretty simple but I like it and the refractor aspect of it makes it even better. 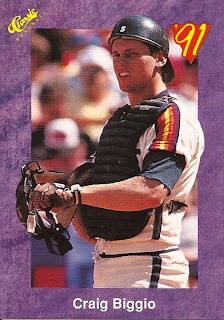 The only reason I added this card is to make fun of it. Not because future Hall of Famer Biggio is on it but because of the color and design. Yes I know it came out in the '90s when that was the style but that's still no excuse. It reminds me of the intro to Saved by the Bell or something distributed by McDonald's. 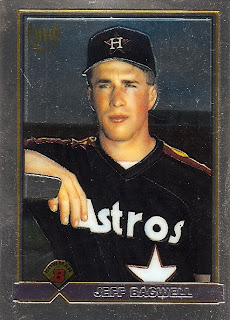 When I saw this card in the stack I was excited. I've always liked the design of Bowman Chrome from this time period and it's a pretty good picture of a young Bagwell. I don't mind that it's a reprint instead of an original as it's a card I don't have yet so I'm more than happy to own it. 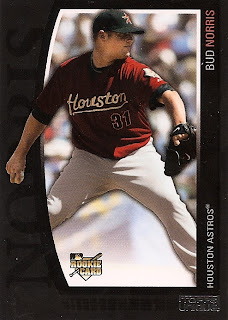 Let me first say I love this card design. It's sleek and modern which I don't always like but it works on this set. Bud looks a little thicker in this photo but he probably was since it's his rookie card.


I know this post is a night later but Bud Norris had an excellent game last night against the Cardinals where he had a no-hitter through 6 2/3 innings. The funny thing is that he wasn't pitching like his usual self. He typically strikes more guys out but last night he had the ball in play more and got the Cards to hit into a couple of double plays. I hope for the Astros sake we keep this guy around for the long haul because he does seem to be a future ace for this club.
Want to know who broke up that no-hit bid last night? I'm sure you already know by now but it was this guy... 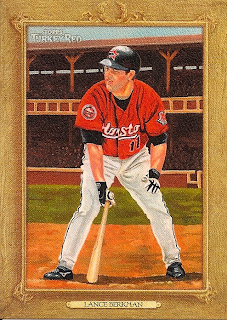 The Big Puma, Lance Berkman, broke up Norris' no-hitter with a home run to the bullpen boxes. Hunter Pence tried his hardest to rob him of a homer but came up 6 inches short of making the catch of the season. After the game Berkman had nothing but good things to say about Norris and that's just the kind of guy Berkman has always been. He's a stand-up guy no matter what some fans may think.
Do Astros fans hate Berkman?
Some do I'm sure but most of us will always have a soft spot for the guy and wish him well. Even some of those who still love him consider him a traitor which I still don't understand. Berkman wanted to come back to Houston this off season and the Astros could have signed him. They decided not to as they wanted to keep Wallace in place as they're planning for the future (that's understandable so I'm not saying their decision was wrong). I know the majority of fans here still respect him and like him but don't see how some fans can dislike a guy who gave this city so much for so many years. I guess that's how sports go sometimes.
Sorry to get off topic there for a second. Thank you Steve for the great trade and I hope you enjoy those White Sox cards. Hopefully we can work something out again sometime soon.
Posted by Trey J. at 9:36 PM

Email ThisBlogThis!Share to TwitterShare to FacebookShare to Pinterest
Labels: Trade

I'm glad the cards arrived safely. I enjoyed this trade and hopefully it will be the first of many. :-)

Topps Unique is fantastic. I wish it'd come back.

@Steve, I'm sure there will be many more.

@Greg, I'm seriously thinking of completing the set now that I've got a look at it. I really like it. Plus I've already got this #'d Norris so that's a start ha.