I stopped by Wal Mart last night and noticed Topps Series 2 was on the shelf already so I decided to buy one of those $9.99 "cereal boxes." Overall I'm content with the box but I got ZERO Astros which kind of sucks but that's the way it goes sometimes. Out of the entire box I got no duplicates so that's always nice. I've scanned the inserts as I assume that's all anyone cares about.

All inserts are for trade and I'm looking to get as many Series 2 Astros cards as I can via trade. So if you see something you like and you're still waiting on your Series 2 to get in let me know and I'll hold the cards so we can work something out for any Astros inserts/base you pull. 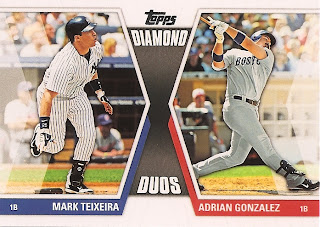 DD-25
I usually start with the more boring of the inserts pulled and this is no exception. Not in love with Diamond Duos and I don't care much for these two players. 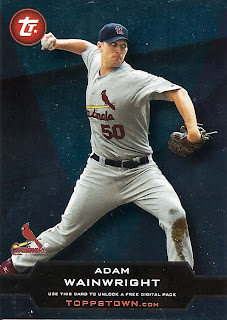 TT2-16
You'll see by the end of this post that this box was destined for a Cardinals fan. I pulled more base/inserts of Cardinals than any other team. 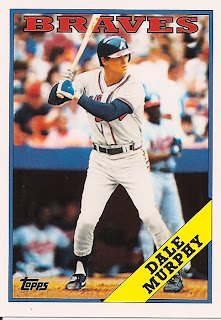 60YOT-96
60 Years of Topps insert of Dale Murphy. Forgive me but I was too young to know much about Murphy but I'm sure there are some Braves fans out there who can enlighten me. 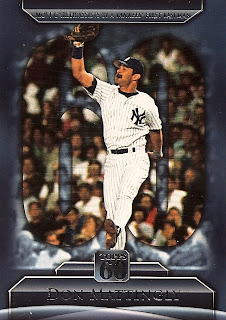 T60-65
Most Career Assists by a Yankee First Basemen??? Not a bad day of work when your name is ahead of Lou Gehrig's. 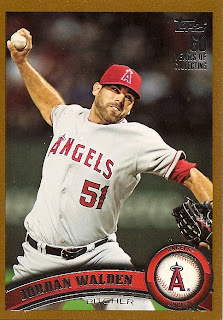 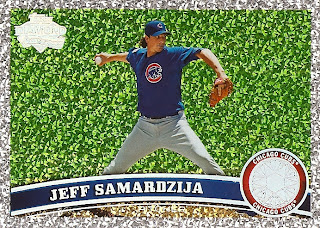 #564 Diamond Anniversary
I get every NL Central team except for the Astros??? I like this guys last name and the fact that he has given up some good numbers to the Astros, that's about it. 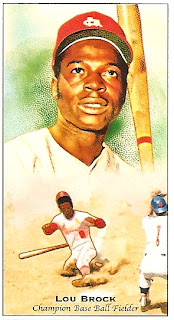 KC-76
Good old Lou Brock on a Kimball mini card. I really like the design of these cards and may one day collect them but it's just not high on my priority list at the moment. Of course I do want that Biggio Kimball mini. 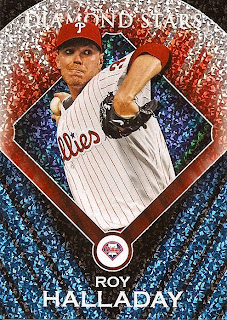 DS-11
These new inserts are extremely shiny have a pretty cool design. I'm not a big fan of sparkly cards but I understand Topp wants to play this Diamond card as much as it can. Any card with Halladay on it is worth having. 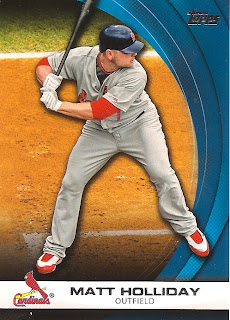 WHP28
Last but not least is Mr. Matt Holliday. I told you the Cardinals would overrun the box. I know some people may think the previous Halladay card was more impressive but I am a big fan of Holliday's and since this is one of those Wal Mart exclusive sapphire cards it surpasses the Halladay.
As I mentioned at the beginning all these inserts are for trade and preferably for Series 2 Astros cards (both base and inserts). Thanks for reading!
Posted by Trey J. at 12:51 PM

Series 2 is out already? I'll have to sample a few packs soon.

I'm not a huge Braves fan, but I saw enough of them on TBS in the 80s to know that Dale Murphy was the best thing about most of those Braves teams.

I didn't know Series Two was out either. I am not pleased about Yankees and Red Sox sharing Diamond Duo cards.

Yea it's out at all of the retail stores here in my area. I looked to be the first to grab any at my Wal Mart as everything was still new and in order. I may stop by and grab another box or two, haven't decided yet. I think I'll wait to finish the set later though. Just get the Astros cards for now.

Hopefully you get some good pulls.