Huge thank you to Crinkly Wrappers

A few weeks back I got a comment from Ted over at Crinkly Wrappers offering to send me over some baseball cards, gratis. I never ask for donations or free cards but I couldn't refuse an offer like this so I agreed. After sending him my address I got a nice package in the mail yesterday.

I don't know the exact size of the box but it easily held 200+ cards. You might think that it consisted of numerous junk cards but in fact it was filled with some pretty awesome cards. Ted said he hoped some of the cards would inspire me to build a set I may not have seen before and after looking at all the cards there are a few sets I'm thinking of collecting.
It's always hard for me to pick which cards to show and which to leave off. Please know that just because a card isn't pictured it doesn't mean I don't like it. I'm sure many of you understand that predicament. 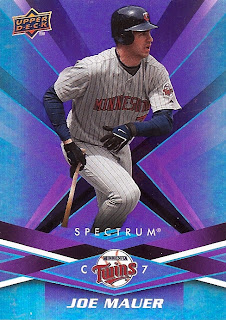 I'm going to catch some flack for this but I have a semi-man-crush on Joe Mauer. I think it's because he's not only a great baseball player but he's a hometown kid and he has that All-American charm all the time. I hate that he's been sidelined so long this season and I can't wait for him to get back out there. 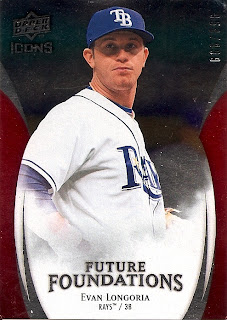 Now this is my true baseball man-crush, Mr. Evan Longoria. Everything Longo does is cool in my book (except wearing a fedora) and my girlfriend can attest to that. He's the reason I rocked a mullet for a couple of weeks this year. He's the only reason I pay much attention to the A.L. East so hopefully he stays healthy and gets his bat rolling soon. 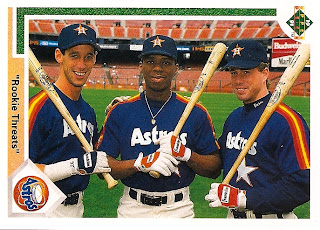 Who designed this card? There's nothing wrong with looking at Bagwell and Gonzo on the same card but I don't like the fact that the logos are meant for a vertical card when the picture is obviously horizontal. I love looking back on great players in their younger years because even superstars look goofy in their younger days. 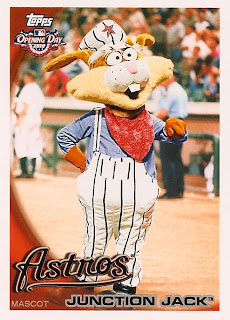 I'm mainly showing this 2010 card of Junction Jack because I wanted to see which uniform you guys liked better. The 2011 Junction Jack will be in the next post so you can comment on there. I love JJ but I miss Orbit sometimes since he's the one I grew up with in the Astrodome. 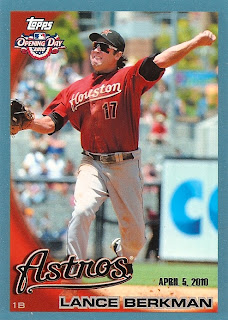 Blue bordered 2010 Topps Opening Day 1394/2010. I like these blue bordered cards a lot. I know some people hate all the color variations and I don't blame them but the blues are ones I can get behind. 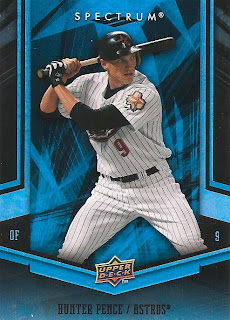 Blue shine? Check. Sweet design? Check. Best Astro on the 2011 roster? Check. Card of a guy who will finish the season in a different uniform? Check back with me in a month and a half. I like this card because of it's design and it features Hunter Pence. I LOVE this card because that blue is beautiful.
Many thanks again to Ted and I will try and repay him sometime in the future. You went above and beyond man and I can't thank you enough. These cards have found a loving home.
Posted by Trey J. at 6:58 PM