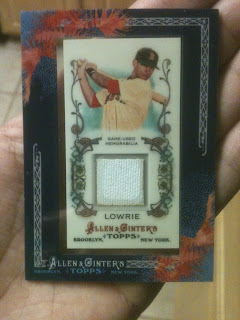 The relic looks a little dirty too so that's always cool. I'm really hoping Lowrie can stay healthy and hit his stride with the Astros. We all know they could use a good SS during this rebuilding phase.
Also, I promise I'll be buying a new scanner soon and I'll try to scan more when I'm visiting my mom's house where my old scanner is. Any suggestions for a cheap scanner would be welcome, don't want to spend too much on one.
Posted by Trey J. at 11:40 AM

I've been resisting picking up a few of those discounted A&G blasters my self. Most of what I need are inserts and I don't have the extra cash right now.

Now if Gypsy Queen discounted blasters started popping up...well that would be a different story!

Is the Billingsley black border for trade?

@Colbey, I haven't busted much A&G this year so it's still fresh to me. I agree about the GQ comment though.

@Spiegel, the Billingsley black border mini is for trade. Just looking for any recent Astros (mini) if you have them.