While I was at Walmart picking up that second A&G blaster I saw that 2010 Bowman Chrome was on sale for $12. I didn't start collecting until the Spring of 2011 so I missed out on the original release of  2010 Bowman Chrome. Having never busted packs of the product I took my chances and bought the cheap blaster. I did ok but here are the better cards of the box. 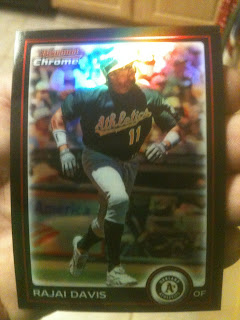 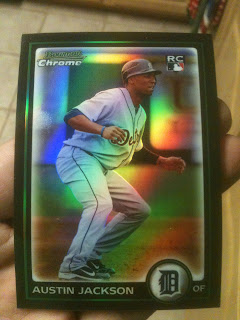 2010 Bowman Chrome Austin Jackson RC Refractor
I think the card gods want me to start an Austin Jackson PC because I have pulled so many refractors of him this year. Let's see how 2012 plays out because I do have a decent headstart if I decide to PC him. 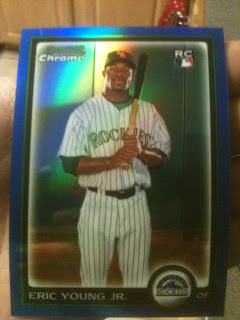 2010 Bowman Chrome Eric Young Jr. RC Blue Refractor 108/150
I was really surprised and excited to pull a blue refractor out of a discounted blaster. I know they aren't crazy rare since there are 150 of each blue refractor but still it's a nice pull. I actually like what I've seen from Eric Young Jr. so that's an added bonus.

If you haven't already and want a cheap but fun blaster break you should check out your local Walmart to see if they have any of these 2010 Bowman Chromes on sale.
Posted by Trey J. at 12:09 PM

If you are interested in trading the EYJr, I think I would have something to trade for it. Let me know.

Let me know what you had in mind for the EYJr and I'll see if I can let it go.