Getting more J.D. from The L.C.

Recently AJ from The Lost Collector let me know he had a J.D. Martinez card I may be interested in. I did actually need the card so we set up a trade with me sending a Manny Banuelos throwback in exchange for the Diamond Anniversary J.D. Martinez. Luckily we don't need David Stern to approve our trades in the blogoshpere. 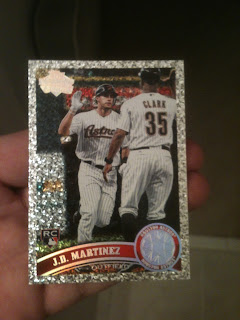 2011 Topps Update Diamond Anniversary
AJ also threw in a handful of other Astros, here are a few of the ones that stood out. 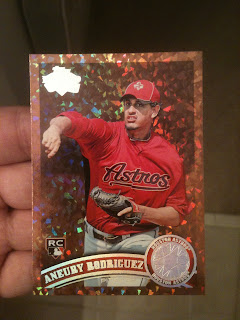 I liked some of what I saw with Anuery Rodriguez last season and I'm hoping to see even more from him in 2012. I like the look of these Cognac parallels they look really "elegant" compared to a lot of cards out there right now. 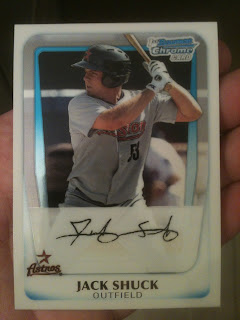 Here's another guy we got to see a little of last season. I don't have much to say about Shuck right now but he's another young player that us Astros fans have to look forward to. 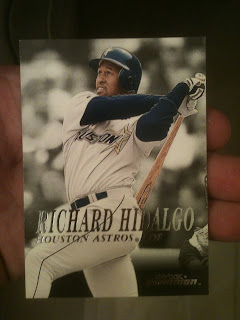 Taking it back old school with this card here. Hidalgo takes me back to my early memories of the Astros. I was born in 1987 so I came of age when Bagwell and Biggio were just starting off. I have vivid memories of going to Astroworld in the morning then heading across 610 to the Astrodome and seeing Bagwell, Biggio and Hidalgo play.
Thanks again to The Lost Collector for the awesome Astros cards, they'll be well loved here.
Posted by Trey J. at 1:05 PM

Thanks again for the Banuelos + Yanks!