Today's post is dedicated to two teams that are near and dear to my heart. One is my Alma Mater and the other is a team I'll cheer for till I die. Today the Sam Houston State Bearkats play in the FCS National Championship game which is a pretty big deal up in Huntsville, Texas. Following the Bearkats game will be the Houston Texans playing their first playoff game in franchise history against the Cincinnati Bengals. 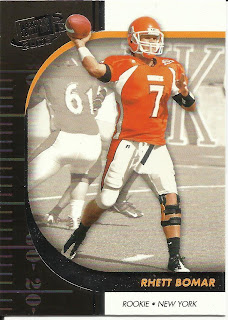 This is the only Sam Houston State card I own. I pulled it out of a PressPass discounted blaster last year. Rhett Bomar isn't the Bearkats QB but he'll have to do for this post since my options are limited. The Bearkats have a high powered offense and they'll need it today but I'm confident they'll bring home the win.
The next two cards I'm going to show aren't my best Texans cards but they're special for another reason. On New Year's Eve I was visiting family up in small town Texas when I noticed my 5 and 6 year old cousins had 2011 Topps Football cards. Being the Texans fan I am I told them that if they had any Texans I'd buy them from them for $2 a card. I know I overspent offering $2 a card but I at least wanted them to be able to grab another pack for giving me theirs. So long story short I bought 2 little base cards for $4.00 BUT my cousins went home a little richer. 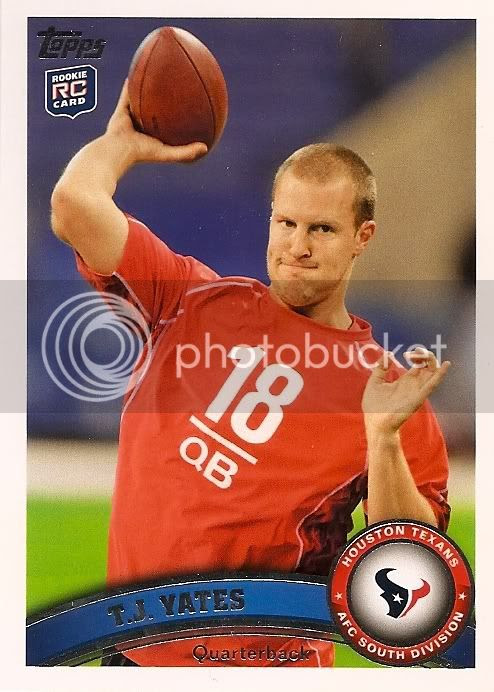 If you would have told me at the beginning of the year the Texans would win the AFC South I'd have agreed with you. However, nobody saw the Texans making the playoffs with a 3rd string rookie QB coming in towards the end of the season. Yates hasn't played perfect but he hasn't been horrible in the few games he's played this season. Just making the playoffs is a big deal to Houston fans but we're hoping they can at least win their first game. 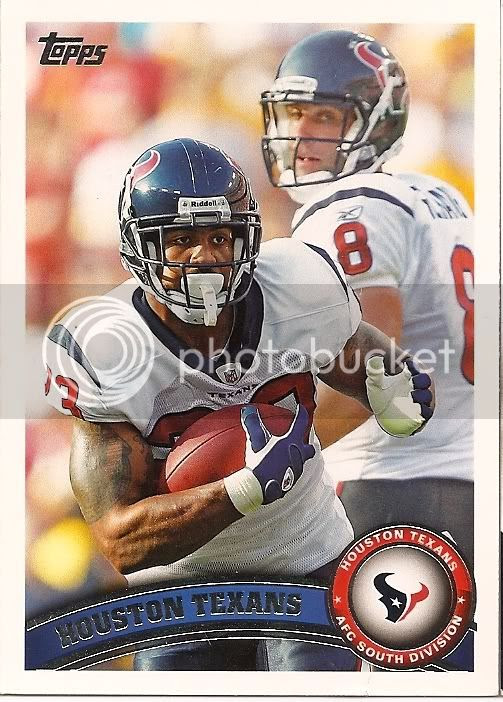 This is the guy who'll have a huge weight on his shoulders today. Arian Foster is the key to the Texans having a successful game. TJ Yates has to play a mistake free game but he doesn't have to make all the plays, Ben Tate can run for 100+ yards we know, Andre Johnson (when healthy) is a top 3 receiver in the NFL, Brian Cushing and the rest of the D seem to answer the call when it matters most but the rhythm and the momentum of the game relies on what Foster can do with the ball. Foster is talented, he's fast, he's determined and he still plays with that chip on his shoulder from being undrafted. Those are the reasons I think he'll have a great game and lead the Texans to their first playoff win.
Am I being optimistic with my predictions? Of course I am. Am I being unrealistic with them? Not at all. It's about time Houston area sports succeed at the next level and I can't think of a better day than today to start.
Bulls On Parade!!!
Eat 'em Up Kats!!!
Posted by Trey J. at 10:03 AM

Heck ya! It's going to be a great day!

That was an awesome Texans game. Yates is starting to grow on me. Bring on the Ravens.

@TheDimwit, great result for the Texans. Not so much for the Bearkats. They'll be back next year I hope.

@Ultimate, Yates is growing on me too. I know he doesn't have the confidence to throw it like Schaub but he does seem more athletic and more willing to run for a first down. As long as he doesn't make mistakes I think the Texans are in for a long playoff run. Especially with that defense.