As some of you may know I'm currently working on acquiring autographs from all the members of the 2005 Astros World Series roster. I'm trying my best to get the autographs either in person or TTM. I've already received a few of the bigger names (Bagwell and Oswalt) from previous in person signings and some of the lesser known players through TTM. However, some of the players are harder to obtain than others. Some guys don't like to sign TTM much, some have retired and their addresses aren't in any databases yet.

Adam Everett is one of those guys who I've had no luck with TTM. I decided that maybe I could just get an auto off eBay and I'd just replace it if I ever get the chance to obtain his auto in person or TTM. I bought this beauty off eBay for dirt cheap and I'm pretty excited to add it to my PC. I know it has a pretty decent size scratch on it (it was marked as Near Mint??) but since it's just a stopgap for the time being I'm alright with that. 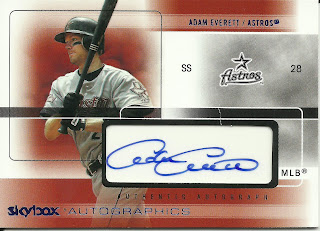 The autograph looks really sharp and other than the scratch I love this card. Everett was a fun SS to watch on the field. He's traveled around a lot since leaving the Astros and I hope he finds a nice home. If he's done playing for good then I wish him the best in retirement and hopefully I'll be able to meet him one day when the 2005 team has a reunion.

I still have a lot of the roster left to obtain but I have faith I can get close to finishing it this year. I'll keep everyone posted throughout the year. Tomorrow the Texans play the Ravens so I'll be pretty nervous over the next 24-36 hours.
Posted by Trey J. at 10:48 AM