Trading with a soon to be "rival"

When the Astros (or whatever their name will be that season) move to the AL next season they'll become rivals with the Texans Rangers. That's what every stupid sports talk show mentions when they discuss the Astros move to the AL.

If you ask fans on either side they'll probably agree and say there won't be a huge rivalry anytime soon. When the Astros were great the Rangers weren't so great. Now that the Rangers are great again the Astros are at the bottom of the barrel. I'm sure there will be years where they're both competitive in the future but it's not happening yet. I'm sure most Rangers fans are pretty apathetic towards the Astros just like many Astros fans really don't care what's happening in Arlington. For the sake of baseball I hope a true rivalry does blossom for both of these teams but I don't like MLB trying to manufacture one.
I got off course there so let me get back to the happy news, ha. After busting a mini-box of 2011 Bowman Sterling I made a trade with Brian over at Play at the Plate or PatP for short. He was interested in the Ogando dual relic I pulled and he sent me over the goodies below. It was a simple trade but a great one and I couldn't be happier with the results. 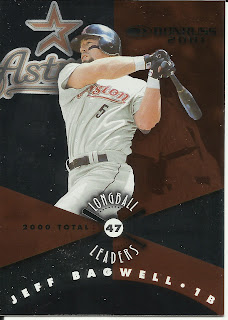 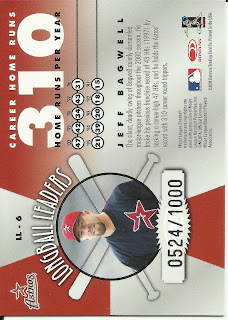 I don't have very many serial numbered Bagwells so it was great to get this beauty. The front scan doesn't do the card justice as it looks so much nicer in person. I was expecting a couple of Bagwells but nothing this awesome. 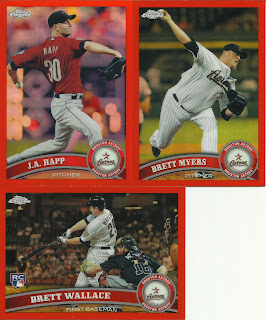 Three orange Astros refractors are a nice addition to my PC. I didn't buy ANY Topps Chrome last year so every chrome card in my PC from 2011 was via trade. These cards look great in person and now I feel compelled to finish the Astros orange team set, ha. 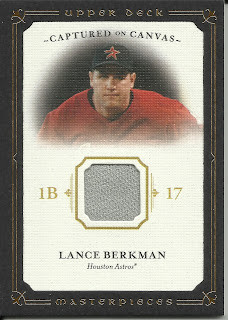 This was the big piece in the trade we made. I love the look of the Masterpiece base cards and these relic cards are just as great looking. I know Berkman is now a Cardinal but it's still awesome to add a jersey card when you can. I do miss Big Puma but it was nice seeing him get a championship finally.
I just want to thank Brian again for the awesome and simple trade. Brian, don't worry even if the Astros and Rangers become EPIC rivals I'll still trade with you as many chances as we get. After all we know once they're done rebuilding the Astros will go back to being THE team to beat in the great State of Texas!!! Only kidding...kind of.
Posted by Trey J. at 6:50 PM