Jeff Bagwell Should be in The Hall!

I have some bias on this subject but I'm sure anyone who watches baseball, specifically from the 1990's through 2006, agrees that Bagwell should be in the Hall of Fame. He never reached the 500 HR benchmark and he didn't have much playoff success. If you look at his numbers though he was one of the best first basemen of his era. 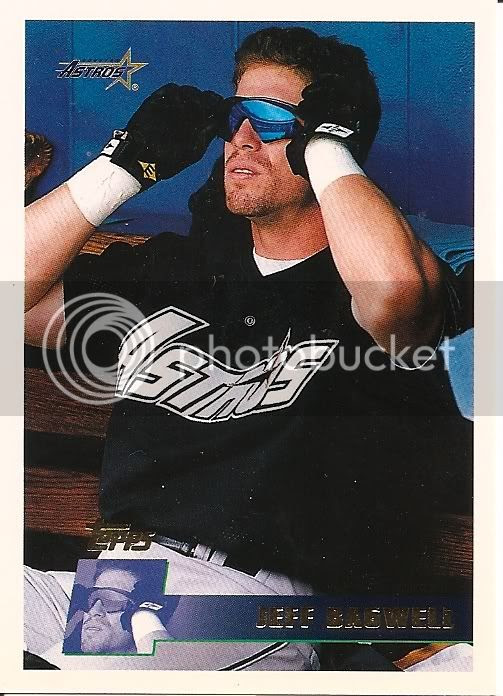 Bagwell doing what he does best, looking cool.
He was Rookie of the Year, a 4-time All Star, an MVP, a Gold Glover, a 3-time Silver Slugger winner AND he accomplished most of his feats while playing in the Astrodome! According to Jayson Stark, Bagwell is the only first basemen to hit 400 homers and steal 200 bases over his career. Bagwell and Gehrig are the only two first basemen to have an OPS-plus of 130 or better in 12 straight seasons.
Two things may hold Bagwell out of the HoF for awhile. One of those is that he played in Houston where not a lot of people outside of the NL got to see him play. This can easily be overcome if voters would just look at his numbers and see that it's an impressive resume when compared to those who've come before him.
The second and most irritating roadblock facing Bagwell is the suspicion that he used steroids or other PED's during his career. Bagwell has never tested positive for steroids/PED's, he wasn't named in the Mitchell Report and other players never mentioned his name along with steroids. Was Bagwell buff? Yea he had muscles but nothing freakishly large or abnormal. If you look at his rookie cards and compare them to the more recent cards you see a normal growth. In this article David Schoenfield mentions that Bagwell's stats take a pretty normal trajectory.
I know the odds of Bagwell getting into the HoF this year are slim but there is hope. If he doesn't get in this year maybe he'll get in the same year as Biggio but I doubt it since the ballot that year is stacked. Bagwell provided Astros fan's with 14 years of pride and excitement. It would be a disservice to Bagwell, the Astros and Major League Baseball if one of it's best players of the 1990's was kept out of the Hall. I don't think it's fair to keep Bagwell out over speculation but if he gets in eventually that's all that matters to me.
Posted by Trey J. at 9:04 AM

I agree that Bagwell should be in the Hall, and I think he will get in one day. His case is the ideal reason for people being on the ballot for 15 years. It might take some people a while to see he is worthy.

I think you forgot another important factor that is holding Bagwell down. The abundance of good to GREAT first basemen in the 1990s. Frank Thomas, Fred McGriff, Mark Grace, plus all the ones that were great for a season or three like Cecil Fielder, John Olerud. Not to mention Mark McGwire and Rafael Palmeiro. It's kind of easy to get lost in that shuffle.

He will make it at some point, I am confident.

@hiflew, yea I know there were an abundance of first basemen that were just plain awesome during his playing time so he does get a bit lost in the shuffle. Statistically he is in the Top 10 of 1B ever so it's just frustrating for it to take so long but it'll happen one day.

From interviews he's done he seems to be pretty chill about the whole HoF thing.

@Reivax, yea I know he'll make it in sometime it's just frustrating as a fan sometimes lol.